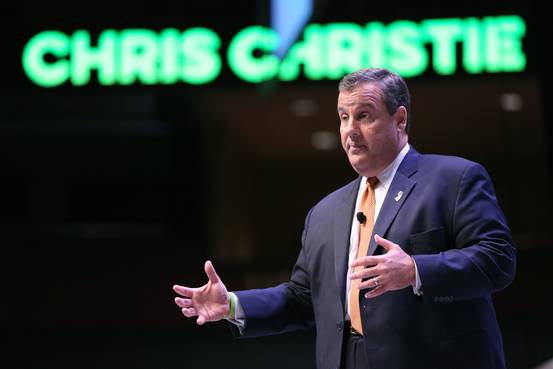 ConservativeTreehouse concludes that the January GOP debate will narrow the field to six: Trump, Cruz, Rubio, Carson, Bush, and Christie.  As that number is considerably more manageable, we can start to look more closely at the candidates' campaign funding sources. Starting with Christie, from the factivist blog, a September 2014 New York Times article
featured a story about Chris Christie’s continued refusal to include New Jersey in a regional anti-climate change partnership that New Jersey itself helped found in 2005. The Regional Greenhouse Gas Initiative (RGGI) is a multi-state entity that seeks to reduce emissions in partner states to mitigate the damage of climate change. New Jersey’s legislature has voted twice for the state to rejoin RGGI, and Christie has vetoed that legislation both times – despite evidence that leaving the partnership has cost New Jersey more than $100 million.
Why?
Because the Big Money donors like the Koch Brothers that bankrolled his efforts – and he hopes will bankroll his presidential campaign – wanted him to.
Since then, OpenSecrets  identifies the America Leads PAC as Christie’s biggest source of funds, over $11 million to date. What is the America Leads PAC?
Open Secrets has a list of all the major PACS here. Most of the names sound generic or innocuous, so one has to dig a bit more. Fortunately, several major bloggers have been doing just that, and here’s what we know from a Politico blog about America Leads PAC:
Donors to the America Leads PAC, which raised $11 million,  were disclosed for the first time Friday. Among them were several billionaires and several companies with million of dollars in state contracts would have been barred from giving to Christie’s gubernatorial campaigns.
Winecup-Gamble Inc., a Nevada ranch owned by former Reebok CEO Paul Fireman, gave the group $1 million. Fireman, who lives outside Boston, plans a massive, $4.6 billion casino in Jersey City if state voters approve a constitutional amendment to allow gambling outside of Atlantic City.
Christie said in May that he favors letting voters decide whether to allow gambling outside of Atlantic City, after he had previously opposed allowing it. Fireman, who with his family has begun making donations to many New Jersey candidates, made the donation to America Leads on June 25.
Las Vegas casino mogul Stephen Wynn, who is not currently involved in the New Jersey gambling industry, gave $25,000.
Hedge fund manager Steve Cohen and his wife Alexandra were the super PAC's biggest backers, giving a combined $2 million.
Another major donor was Quicken Loans chairman Daniel Gilbert, who gave $750,000.
Home Depot founder Ken Langone, who has been one of Christie’s biggest backers, gave $250,000, and Anheuser-Busch heir August Busch gave $100,000.
Hewlett-Packard CEO Meg Whitman chipped in $100,000. So did Christie’s brother Todd.
Wrestling mogul Linda McMahon, who ran twice for the U.S. Senate in Connecticut, donated $250,000.
George Harms Construction, which in 2014 had more than $100 million in contracts with several state agencies, gave $25,000. Ferreira Construction, which made more than $34 million from the New Jersey Turnpike Authority in 2014, gave $100,000.
Public Service Enterprise Group, which as a regulated utility also would have been barred from giving to Christie’s gubernatorial campaign, gave $250,000.
The link to the FEC source, hyperlinked above, is here.
Christie has almost no chance of becoming the presidential candidate. According to Conservative Treehouse, his role in the primary campaign is the same as the many of the remaining candidates in the GOPe field (such as Fiorina, Huckabee, Kasich, Rubio) each of whose role is to split GOP primary votes in particular states to lead to a Jeb! nomination.


To be continued…
Posted by Diana at 1:49 PM No comments:

The Omnibus spending bill and the Uniparty 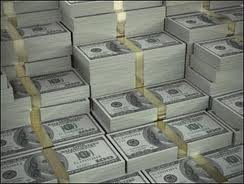 Last Friday, Jim Robb at NumbersUSA reported on the Omnibus spending bill that sold conservative voters down the river:

This week, Congress pushed through a horrible Omnibus spending bill to fund the government through next September.
The bill amounts to a betrayal of American voters, especially on immigration matters.
Where do I begin to condemn this? I'll start with House Speaker Paul Ryan.
It didn't take long for Ryan to break all his promises on immigration, did it?
When he was running for Speaker two months ago, Ryan promised he would not bring up immigration bills that did not have the backing of a majority of Republican House Members.
Yet as soon as he got the chance, Ryan snuck several huge immigration giveaways into the Omnibus spending bill Congress approved today. It goes further:
Nearly QUADRUPLES the number of H-2B low-skilled foreign workers allowed in this year. This could raise the total of these workers this year from 66,000 to 264,000.
Not only that...
FUNDS a large increase in Syrian and other refugee resettlement in this country. Instead of a timeout and a full security review, Congress handed Obama everything he wants.
FUNDS Obama's catch-and-release policy that virtually stops deportations.
FUNDS Sanctuary Cities, so that cities like San Francisco that refuse to turn over jailed illegal aliens to the feds will face no cut in funding.
MAINTAINS tax credits to illegal aliens in the form of the Earned Income Tax Credit. That is, if a family is poor enough, they not only pay no income tax, the government pays THEM. Yes, that includes illegal aliens! Also, Congress continues to allow illegal aliens to claim child tax credits on their tax returns.
FUNDS the continued relocation into America of the unaccompanied minors who are marching across the border into Texas and states. The numbers of these crossing the border is way up again this year.
Even with all these outrages I've mentioned, there are still MORE terrible things hidden in the Omnibus bill, which passed both the House and the Senate. A hopeful sign is that 95 House Republicans joined with 18 House Democrats, and 26 Senate Republicans joined with 6 Senate Democrats to vote NO on this monstrosity. Yet, most Republicans and most all the Democrats voted yes, and it passed.
The House roll call votes are here; the Senate roll call votes are here.
Voting YEA on this irresponsible bill were Rep. Marcia Fudge, Sen. Sherrod Brown, and House Republicans from Ohio Steve Chabot, Brad Wenstrup, Bill Johnson, Michael Turner, Pat Tiberi, Tim Ryan, David Joyce, Steve Stivers, and James Renacci.
Rob Portman, Ted Cruz, and Rand Paul voted against the bill. Marco Rubio did not cast a vote. Also disappointing were Congressional freshmen who ran on conservative values and then voted for this “monstrosity,” such as Mia Love and Martha McSally.
As Conservative Treehouse concluded,
the Omnibus Spending and Tax Provision bills, used by Republicans in lieu of an actual Fiscal Year 2016 budget . . . passed. . . .

Summary:  [conservative voters] gave Republicans large majorities in both the House and Senate so they could push-back against ridiculous progressive big government spending.   What did the REPUBLICAN LEADERSHIP do with the majority?   Republicans constructed big spending on behalf of the Democrats and voted with them to end up with the same result if Democrats were in control.

This blog will be taking a close look at the UniParty as we head into next year.

Over at Conservative Treehouse we read that Saudi Prince Alwaleed bin Talal is outraged at GOP candidate Donald Trump’s plan to build a wall at the southern border of the US. The Prince
has called Donald Trump a disgrace to the United States following his call for a ban on Muslims entering the country, and demanded the Republican front-runner withdraw from the U.S. presidential race.
. . .
“You are a disgrace not only to the GOP but to all America,” Prince Alwaleed, the chairman of Kingdom Holding, said on his Twitter account, addressing Trump and referring to the Republican Party.
Screen shot of the Twitter Feed is at the link here.
This report links to The Jerusalem Post here:
Just over a week ago, IS militants launched an attack on a Saudi border post, killing a senior Saudi general and two border guards, marking the first direct IS assault on Saudi grounds, The Telegraph reported.
In an effort to defend itself from the IS threat and further attacks, the [Saudi] kingdom launched a massive project to construct a "Great Wall" along it's northern border with Iraq, where IS presence is heavy.
Proposed in 2006, the border zone entails five layers of fencing, supplemented by watch towers, radar cameras, night-vision security, and a heavy presence of extra Saudi troops, according to the report.
The wall is set to extend nearly 1000-km and will combine fence and ditch barriers along the northern Saudi border.
Riyadh hopes that the completed project will fend off IS threats and keep the relatively closed kingdom, closed indeed.
Hypocrisy.
# # # 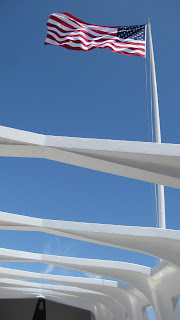 
It is even more important that we remember these patriots when we are perpetually informed that the biggest threat we face today is global warming.

For those who don't "do" PC

This image has been making the rounds on FB and elsewhere ... in case you missed it.